THE U.S. AND THEIR ALLIES HAVE ALMOST LOST THE WAR IN AFGHANISTAN. 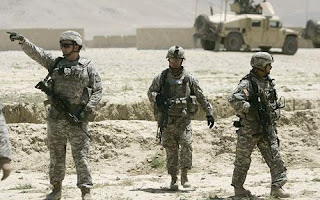 With the allies losing their war against the Taliban in Afghanistan, the US and their allies are now attempting to subdue the Afghan people using terror; the very methods they had hypocritically accused the Taliban of using and which were offered to the world as part of their justification to invade Afghanistan in the first place.

The other justification, of course, was to capture or kill Osama bin Laden and to destroy ‘al Qaeda’. Almost seven years later and there is still no sign of bin Laden, and al Qaeda, indeed, if the propaganda and rhetoric of the Western neocon and mainstream media is anything to go by, al Qaeda has grown and flourished and now has branches everywhere including Iraq, Egypt, Palestine, Lebanon, Morocco and throughout much of Africa including Nigeria, Ethiopia and elsewhere, not to mention still in Afghanistan and Pakistan.

One has to wonder what got into the minds of the US government when they declared that they had ‘routed’ the Taliban in December 2001 after the US invasion of Afghanistan the previous October. It now seems that Bush’s claim of ‘victory’ over the Taliban was to say the least, premature – a mistake he repeated when claiming ‘mission accomplished’ on 1 May 2003 after the March 2003 invasion of Iraq.

The reality is that Bush and the neocons, far from wanting to liberate the peoples of Afghanistan and Iraq from brutal regimes and dictators, were far more interested in liberating the Iraqi people of their resources and subduing the Afghan people into submitting to US hegemony for their own nefarious and ulterior motives. What the US hadn’t accounted for was the fact that most people, regardless of how despicable the people that rule them are, will no tolerate a foreign troop on their soil who they know are there to steal from them.

Above is a photograph of US troops in Afghanistan but imagine if you will that they are Afghani troops in, say, Outback Australia and their supporting warplanes had just bombed and killed 76 civilians including 50 women and 19 children in Alice Springs. How would you feel about that?
You’d be outraged to the point that if you were a young man and one of those killed was a relative or friend and there was a resistance movement against these foreign troops on your soil you’d be inclined to join up and fight back would you not.

Why then should the people of Afghanistan not feel any different?

And that’s why the US and their allies can never win in either Afghanistan or Iraq.
Posted by Damian Lataan at 11:46 AM

Call my card on it, should I be incorrect. I do believe that the Taliban outlawed the production of Poppy Flowers....NO HEROIN.

I do remember an absolute fact, that was made public, of the US handing out Poppy seeds. Of course, this is after they chased the evil Taliban out.

Time will tell, but I feel sure that Bush, and other NEO CONS will see their day in the Hague. For War Crimes, and direct manipulation of the World based entirely off of profit.


United In Peace And Freedom

They are not there (in Afganistan) to "win" a war. They are there to protect that BTC pipeline or whatever it's called. Therefore they will stay there for decades.
And yes, after 7 years of fighting that invisible "Al Queda" best they can do is "convict" Bin Alladin's driver. Oh well, if you can't get Osama, his driver will have to do i guess.