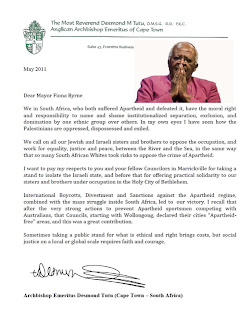 Despite the Australian major political parties condemning the Boycott, Divestment and Sanctions (BDS) movement against Israeli apartheid, and even Bob Brown of the Australian Greens party who, as Antony Loewenstein suggests, has spoken against the BDS campaign for purely political reasons, Archbishop Desmond Tutu has endorsed the campaign by penning a letter of support to the Mayor and Councillors of Marrickville in Australia for their BDS actions. One can only hope that those Greens that have chosen to condemn the BDS movement in order to pander to current political public opinion in Australia – and that includes Bob Brown – will now reconsider their position and support the BDS campaign.

Bob Brown is out of step with the grass roots of the Green movement on this issue. He must get back into step because he will not be gaining any votes by maintaining his current position; indeed, he’ll be losing them!

Thanks to Sonja Karkar of Australian Friends of Palestine for bringing this to our attention.
Posted by Damian Lataan at 10:37 AM

Desmond Tutu has a very suspicious history when it comes to demonisation of the Jews:

Not Israeli, not Zionists, he specifically mentions "Jews" in his xenophobic tirades.

I'm afraid linking to an article written by chief propagandist for the Zionazis, Alan Dershowitz, isn't very impressive. It deprives your assertion about Tutu of all credibility.

In the past, Tutu has referred to Jews in a negative sense as 'Jews' rather than 'Israelis' or 'Zionists' because during the apartheid days in South Africa many white supremicists were in fact Jews; not Zionists or Israelis. That's why he specifically mentions 'Jews' in that way.

You provide no example of any of the 'xenophobic tirades' you refer to.