A BOOK FROM 'ABOUT TIME PUBLICATIONS' NOW AVAILABLE... 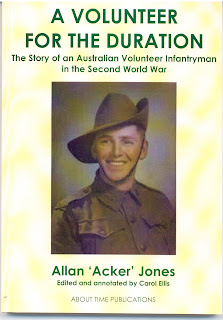 Allan ‘Acker’ Jones was twenty one when he joined the AIF as a volunteer shortly after the fall of France in June 1940. As a member of the 2/43 Battalion, Ninth Division, he served in North Africa for seven months during the siege of Tobruk and later at the battles for El Alamein. After returning to Australia in 1941, his battalion trained in Queensland for jungle warfare before combating the Japanese in New Guinea. This story vividly describes the locations, events, characters and emotions that one infantryman encountered and experienced from the day he signed up to the day he was discharged in 1945.

To place order and for payment details email:
lataan@adam.com.au
Posted by Damian Lataan at 8:20 AM