While it is true that there have been rifts between Shi’ite and Sunni Muslims in many Islamic countries, they have mainly been driven by local tribal and secular political agenda’s. Such rifts which would ordinarily be considered piffling among the two denominations and considered merely as internal power struggles within districts and some Arab nations have been propagandised over the last ten years by right-wing Israelis and their neoconservative supporters around the world in an attempt to polarise the two denominations beyond the domestic quarrels they occasionally have with each other. In the case of Iraq and Syria most of these quarrels have actually been stirred up by Western influences. It’s a classic case of divide and rule.

However, there is one area of Middle East politics where the two denominations, as illustrated below, stand hand in hand with each other, literally, and that is with their support of Arab resistance against Israeli expansionism and Zionist oppression. 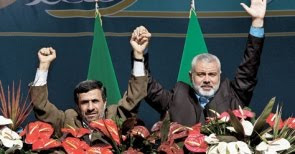 President of Iran Mahmoud Ahmadinejad, on the left, is a Shi’ite Muslim, while Hamas Prime Minister Ismail Haniyeh is a Sunni Muslim.

The two denominations may squabble over domestic politics in their respective nations, but when it comes to supporting the Palestinian people in their fight to defend their nation against Zionism, they are very much united.

So if Israel and the West think that a change in regime in Syria or Iran is somehow going to be of benefit to the Zionists, they'd better think again. Syrians - Shia or Sunni - will unite when it comes to regaining their lands in the Golan Heights and supporting the Palestinian and Arab peoples of south Lebanon in their fight against Israel aggression and expansionism.
Posted by Damian Lataan at 11:30 AM

Ahmadinejad is not "representative" of Shi'ite Muslims, only of the corrupt and oppressive regime he represents. I've no doubt that most Shia are anti-Zionist, and would fight alongside Sunnis for the cause, but you've chosen a very poor example to demonstrate this.

The point of the article was to demonstrate that, contrary to some opinion, Shia and Sunni Muslims are united against Zionist Israel.

The view that Ahmadinejad is 'unrepresentative' and not a good 'example' is irrelevant and doesn't change the fact that the rift between the two denominations are much exaggerated.

The people of Syria will never forget the personnel, material and weaponised support provided by Hezbollah and Iran to help the Assad regime oppress its citizens.

The inevitable post-Assad era does not look rosy for Iran's strategic standpoint.

Anonymous, in the 'post-Assad era' Syrians will still be wanting the Golan Heights back and Hezbollah will remain an ally of any Syrians that oppose Israeli aggression and occupation regardless of the situation currently in Syria and Hezbollah's role in it.

Likewise, Iran will remain an ally of the Syrian people when it comes to relations with Israel.

The crisis in Syria, as serious as it is, remains merely a domestic crisis. It will not effect the Syrian peoples view of Israel and its occupation of the Golan Heights.

You'll find things aren't quite as black and white in that region as you would like to think they are.

I can't say I'd pay 5 cents for any 'western' appraisal of Assad's ethics or popularity. There have far too many holes in far too many stories about Iraq, Egypt, Libya and Somalia to think candour and astute appraisal is suddenly in vogue.