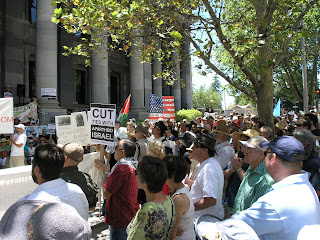 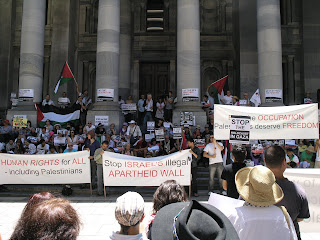 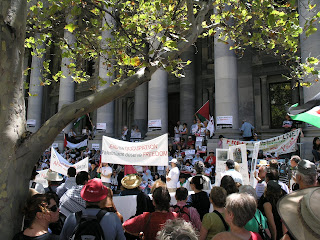 The protest in Adelaide on Sunday, 11 January 2009, was organised by the Australian Friends of Palestine Association and was attended by some 2000 protestors who gathered at relatively short notice on the steps of the South Australia State Parliament to hear various State and Federal politicians and other Australian activists denounce the Israeli carnage in the Gaza Strip.

Most noticeably speakers generally berated the Australian Labor government for their silence on the carnage that is being heaped on to the Gazan people and the rally called for an immediate end to the Israeli onslaught.

Posted by Damian Lataan at 8:20 PM

Australian media reports that thousands of Australian Jews have demonstrated in support of Israel and have actually invited Palestinians living in Australia to join them in finding a just solution !

That is some Chutzpah !

Well, it won't work anymore as we all know of the infiltration of both Fatah and Hamas, and i'm sure the Palestinians are fed up with it and would see this invite as same old same old.

I can't imagine any Palestinian in Australia who has seen, and they would have, the indescribably horrific vision, maybe 200 pics by now, of Israeli wanton mass murder, because it is sport - remember we are not human to them, by every kind of ordnance known and unknown, still willing to be used to perpetuate the existence of Israel !

For my part, any Australian Jew who still supports Israel after what they have done/are still doing and after what they saw the IDF do in Lebanon in July/August 06, is no longer a Jew but is a Israeli and hence should be regarded as a foreign national who will return promptly to his country of declared loyalty and stay there.