IT’S NOT JUST ABOUT CLIMATE CHANGE, IT’S ABOUT RESOURCES FOR THE FUTURE

The climate change debate has caused us to lose sight of the real issue at stake.

The right-wing media that support the polluters are contesting the Greens argument that continued use of the earths non-renewable resources as a fuel will eventually lead to a rise in temperatures that will ultimately see many of the planets low lying areas become engulfed by and lost to rising sea levels. The right-wing media argues simply that this just won’t happen and that there’s no proof to support it. The Greens, in turn, say there is ample proof and that we should take immediate steps to do something about it.

To help the pollutionists argument, the right-wing have arranged an assortment of so-called experts to travel around the planet in an attempt to persuade the ‘don’t knows’ and ‘not convinced’ into their camp. One of the most prolific pro-pollutionist speakers, an ‘expert’ with no formal qualifications in the field, is a certain Lord Christopher Monckton. As part of his rhetoric, Monckton actually claims to be a member of Britain’s House of Lords while knowing that he is not. So serious is the matter that the House of Lords have had to ask Monckton to refrain from claiming that he is a member. ‘Lord’ Monckton, thus, has no credibility yet the pro-pollutionists continue to pay for his services. While there are far more pro-climate change scientists around than there are denialist scientists – most of whom seem to have various vested interests in supporting the pollutionists – the denialist scientists have the support of a massive right-wing media controlled mainly by the now much troubled Murdoch group of companies.

In the pro-polluters camp there are two distinct groups. One group are the polluters themselves who are currently making a lot of money out of polluting and so don’t want to stop polluting; and then there is a second more complex group that support the polluters cause but for their own nefarious reasons. Together they have formed an alliance that is determined to stop the world from stopping the polluters polluting it.

The second group that support the polluters do so only because their primary concern is that they don’t want to have to pay the polluters compensation to stop polluting us which is what some of the world’s governments are proposing. They are also concerned that the polluters will more than likely not stop polluting us and far more likely make even more money by trading in the complex government-sponsored ‘carbon credits’ scheme. They argue simply that a ‘carbon tax’ will cost the planet in jobs and money and do little or nothing to stop climate change – if, indeed, it’s actually changing anyway.

Within the second group there is a small group who think, possibly rightly, that the ‘carbon tax’ is just another government rip off from the ordinary working class world that will achieve nothing except enrich further those that are already rich. This group aren’t so much for the pollutionists but, rather, against the impost of a tax. In nations like Australia where a ‘carbon tax’ is being proposed, this group are politically important because they may well be the group that decide who will next govern Australia because, the way things are going at the moment, the next election could revolve almost entirely around this issue.

My argument, however, is not so much about whether or not there is climate change occurring – I happen to think there is - but more about the future of resources for a world that our children, grand-children and great grand-children will inherit; a future which should concern all of us whether we are believers or not.

Our world is populating at an exponential rate; it has more than tripled in just the last 90 years. Advances in medicine and health care have ensured a generally longer life. Fertility treatment, higher birth survival rates and post-natal care practices also play a part in increasing the world’s population. Although wars, unfortunately, are still a part of human existence on the planet, they are nowhere near as devastating in terms of numbers dead as the wars that dominated the twentieth century and this fact too has increased the planets population. As a result, in 50 years time we can expect a world population of some 10-12 billion people from the 6.93 billion we have now. Providing energy for such large numbers of people from non-renewable resources is likely to deplete the known resources very quickly.

Pro-pollutionists argue that there are still plenty of resources left in the ground that has not yet been discovered. The obvious retort to such an argument is; if it has not yet been discovered, how can anyone say that there's plenty left? While it is true that man has over the past several decades since the Second World War discovered vast deposits of energy resources, we have quickly used much of these up, and the areas where man can now look have been all but exhausted. The pro-pollutionists, however, insist on continuing to search for these resources knowing that the chances of finding them become less likely as each day goes by.

We need to ask ourselves a number of questions; first, are we willing to take a punt on there actually being vast amounts of resources left and, even if there are, how much longer will it last before we need to start another desperate search for more? Second, if we do find the extra reserves the planet needs, are we willing to take a punt on the climate change scientists being wrong by going ahead and burning it in the hope that it will have no ill effects? And when those reserves do run out; what then?

Our planet’s engineers now have the technology to produce energy from solar, lunar and geothermal resources. We can produce power directly from the sun via photo-voltaic (PV) cells, direct radiation on absorber panels (solar hot water systems), wind energy (which comes via the sun heating air masses which causes air to expand and move), and other devices that use mirrors and lenses. We can produce power by harnessing the moon’s gravitational pull on the worlds oceans (tidal and wave power); and we have an abundant source of geothermal power locked up beneath the earths surface which we are only just beginning to understand and use though some countries, like Iceland, have been using geothermal power for years for various applications including heating water and living spaces as well as generating electricity.

For sure, much of this technology is still in its infancy and a lot of research and development still needs to be done before it can be used universally and in enough numbers where a point can be reached that we no longer need to worry about our future energy needs even if we knew there was no more non-renewable resources left to use, but we are moving along fairly rapidly. Just recently there has been a tremendous surge in the use of PV energy generation. PV panels are now the most common form of renewable energy generation used in private homes. Advances in PV efficiency both in terms of power generation and cost have allowed them to become a very practical alternative to ever-increasing power bills for many households. If the PV technology advances follows anything like the way computer technology advanced then we could very quickly see rapid universal use of them everywhere.

Wind power generation has also seen huge advances in use in less than a decade. In South Australia, for example, more than 20% of the states power needs are generated from wind turbines with more on the way. And, again, wind turbine technology is also seeing this form of power generation come into rapidly increasing usage.

We do still have a long way to go but the time it takes to get there can be drastically shortened if the energy providers of the world can be given incentives to increase their research and development to providing renewable energy resources rather than using up what’s left of the worlds non-renewable resources. There is far more at stake here than the loss of a few coalminers jobs or the non-renewable energy providers profits. We need to look forward to a world that doesn’t rely on fuels that will run out; a world where its inhabitants don’t have to fight over the pickings of what reserves are left; a world that stops consuming itself and instead uses what our solar system can provide – abundant energy that will increase the quality of life for everyone on the planet. 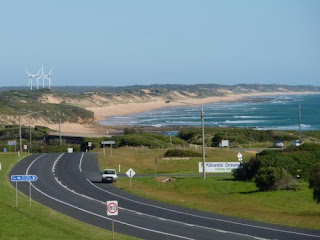 The choice is simple. You can have this (above) which the likes of Andrew Bolt, a notorious pro-pollutionist, thinks is a “rotten thing” because, he says, it has ruined one of his “favourite views in Victoria”, or we can have this (below). 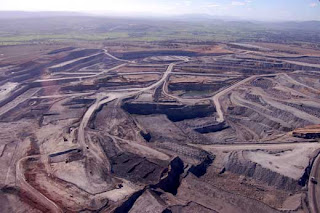 The so-called ‘carbon tax’, which will pay for the research and development of renewable resources, is a small price to pay, both now and for our future.
Posted by Damian Lataan at 3:18 PM